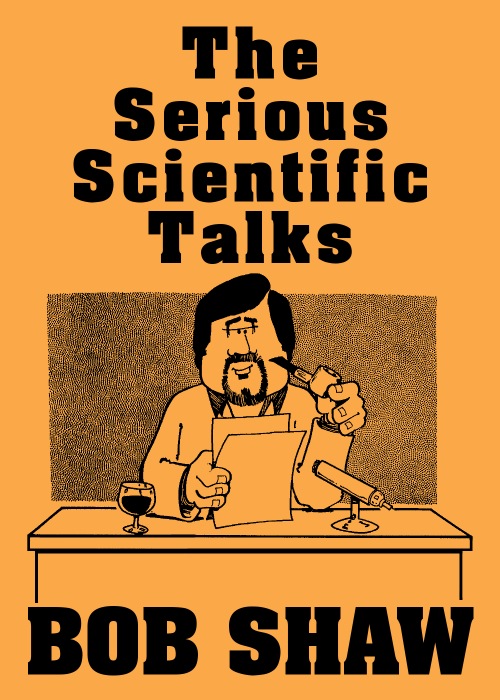 Bob Shaw’s famously hilarious “Serious Scientific Talks” have never been collected in a single volume – not even now, alas, because despite hopes that this ebook could be titled All the Serious Scientific Talks we have yet to trace the final talk delivered by Bob at the 1995 Eastercon (Confabulation) and the Glasgow Worldcon later that year (Intersection). If anyone can provide a copy, transcription or recording of this speech, it will be promptly added to this collection and the change announced. That’s a promise.

As it stands, the ebook contains fifteen Bob Shaw speeches, five never before collected. First published as an Ansible Editions ebook for the TAFF site on 1 November 2019. Cover art by Jim Barker from the 1979 chapbook The Eastercon Speeches (five early talks), edited by Rob Jackson. 65,000 words on first release; expanded in July 2020 to include the further talk “Campus Fugit”, bringing the total to 69,000 words. Contents list here.

This collection is complemented by The Full Glass Bushel, issued as a TAFF ebook in June 2020, which brings together all the “Glass Bushel” columns plus further BoSh articles published in Hyphen. A third and even larger ebook of Bob Shaw’s other fanzine writings was added to the TAFF ebook library in August 2020 and is titled Slow Pint Glass.

From the 1979 Introduction
by Mike Glicksohn

With over a hundred North American conventions in my past and a single British Eastercon to boot, I’ve seen just about everything, but I’d be hard-pressed to dredge up a more surprising sight than an entire bar filled with happily and heavily drinking British fannish fans voluntarily abandoning their womb in order to sit in on a program item. At first I thought some fiend had introduced an emetic or an aphrodisiac into the beer supply, but when everyone filed into the main program hall at the 1975 Eastercon in Coventry I realised I was witness to a truly unique fannish phenomenon. An hour or so later, I understood that unusual hegira perfectly: I’d just heard my first Bob Shaw speech!