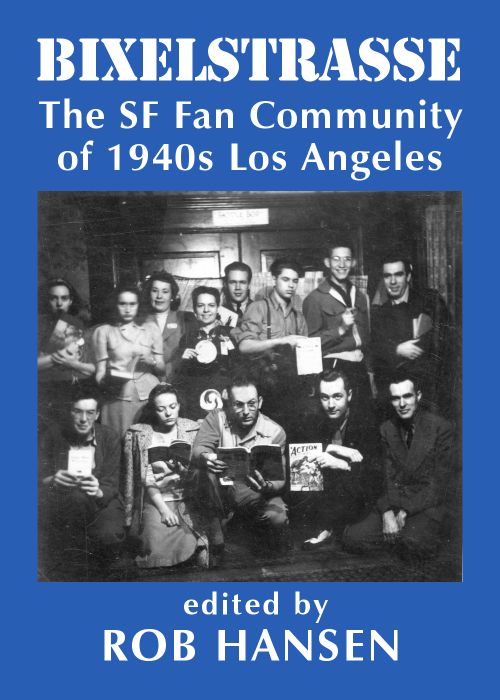 First published as an Ansible Editions ebook for the TAFF site on 29 November 2021 at 193,000 words. Slightly expanded on 12 December 2021 with a previously undiscovered fragment: now nearly 194,000 words.

By popular request a printed paperback edition is also available as of April 2022: click here for more.

The Bixel Street era of LASFS has fascinated me since I first read about it in Harry Warner Jr’s All Our Yesterdays. Yes, there have been other occasions on which fans have shared premises in varying degrees, but to have a community of fans centred around a clubroom and living in nearby rooming houses on the same street gave rise to all-week, around-the-clock fanning of a sort not seen before or since. [...]

This set-up, the whole “fannish village” they established, was immensely appealing to me in my twenties (though seeing so much of each other inevitably exacerbated personality clashes, of course). Add in the large numbers of fans from around the country who passed through Los Angeles thanks to the war, many of them processed via the Induction Center at nearby Fort MacArthur before being sent off to fight, and you have something unique in the history of fandom, a saga featuring fans and pros, communists and homosexuals, madmen and mystics, Hollywood stars and spies.

Within the confines of mundane South Bixel Street lay the Bixelstrasse, a name that describes the tight cluster of dwellings on that street that housed its fannish community....