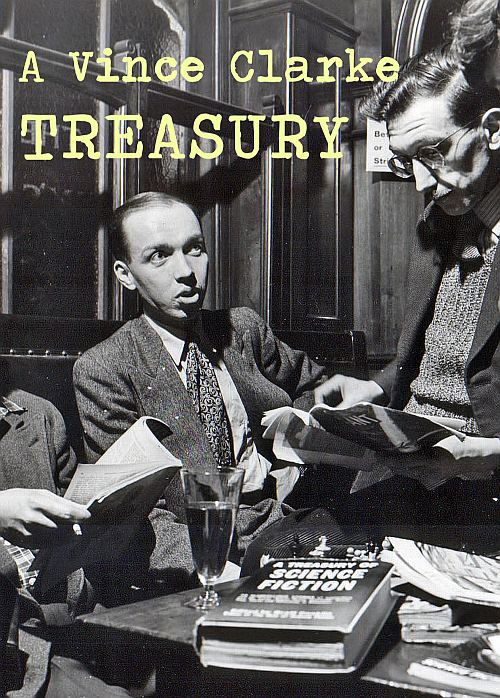 Publisher’s Note (from the ebook)

It seems only appropriate that the free ebooks page at the TAFF (Trans-Atlantic Fan Fund) website – taff.org.uk – should include a collection of Vince Clarke’s fanzine writing. He was the first winner of TAFF, though in the event unable to make the trip to a US Worldcon which was the aim of the fund, and he promoted TAFF enthusiastically in both halves of his interrupted fannish career.

This collection is similarly divided into two parts, covering the early years from 1948 to 1960 and then (after his long absence) a second voyage through fandom from 1982 to 1998. Hims Ancient and Modern, as Chuch Harris once put it. Part One is notable for its speedy progression from “serious and constructive” coverage of the 1948 British SF convention to the manic humour and mythologizing of fandom that soon follows. As well as a rich seam of material for fan historians, there’s plenty of outright fun here.

What was first imagined as a short sampler of Vince’s writing career highlights has become a rather substantial volume owing to help, advice, online resources, research and transcription work from the following splendid people: [credits list omitted here].

The material in this ebook is arranged roughly chronologically, from 1948 to the late 1990s, followed by a few word-processed items of uncertain date which may never have been published. Appendices include a glossary titled Fan Slang and Abbreviations, based on a short piece by Vince himself and expanded with other arcane terms scattered through the articles and stories that follow.