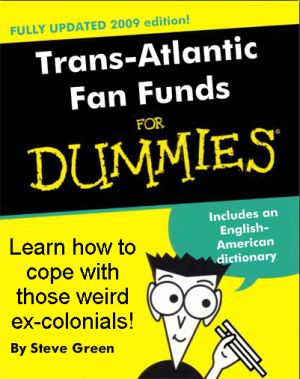 I blame Martin Tudor. We were at his home in Willenhall, north of Birmingham, helping my younger goddaughter celebrate Halloween with the offspring of various other local fans, when the suggestion arose again that I should stand for the TransAtlantic Fan Fund. Only seven months earlier, I'd told Chris Garcia point blank that there was no chance I'd ever put myself forward, but that was a different life, before I lost Ann, and Martin was convinced campaigning – and maybe even winning the race – would give me a renewed direction. That he was also about to become single may have fuelled his own enthusiasm for the project; whatever the case, he beat me down.

Ironically, our initial hurdle was actually finding someone to stand against me, since TAFF's rules explicitly prohibit a one-horse race (in contrast, I believe the Canadian Unity Fan Fund has never been contested). Perhaps because the target Worldcon was Canadian (indeed, this would be the first time TAFF was aiming north of the border), there didn't seem to be the usual groundswell of interest on the eastern side of the Pond.

(Chris had suffered similar problems when he first attempted to stand, back in 2007, and that race had no sooner launched than it was called off due to the cancellation of the planned Eastercon. By the time another event had taken its place, all bets were off and both administrators found themselves locked in post for an extra year.)

Eventually, John Coxon offered to step forward and adopt much the same stance as Mike Simpson had taken during Martin's second and successful stab at the honour, quietly backing his opponent's campaign. The fact that I'd be following in my Critical Wave co-editor's footsteps with an equally contrived ballot didn't altogether sit well with us, but the alternative was to postpone my own run and leave poor old Bridget Bradshaw holding the reins for an unprecedented fourth year. In the final event, John was forced to drop off the ballot when he discovered the trip would coincide with a friend's wedding, but Tom Womack unexpectedly announced his willingness to ensure the race would go ahead. You could probably have heard the sighs of relief on the Eastern Seaboard.

Thankfully, neither of us encountered any difficulties with recruiting a full set of nominations. Tom got the backing of Geri Sullivan and Vicki Rosenzweig (USA), Clare Boothby, Liz Batty and Alison Scott (UK), whilst I notched up support from Lloyd & Yvonne Penney (Canada), Randy Byers (USA), Peter Weston, Mark Plummer and Martin (UK).

The new line-up was formally unveiled at Novacon 38, with a voting deadline set just after the Bradford Eastercon. Better still, Tom and I were both attending the latter gathering, so Peter Sullivan was able to organise an informal video uplink and interview us both for the Ustream network, scoring another first for TAFF (and possibly fan funds in general).

We also took part in a panel discussion together, where I have to confess to being slightly the worse for over-refreshment (I was finding at the time I could make it through the first day of a convention, but the second often proved more of a struggle, as I hit a kind of emotional tipping-point; this would be something I'd have to watch out for if I made it to Canada). Tom came off pretty well, which fell in line with his hope that standing for TAFF would boost his profile outside his usual online prowling grounds.

Less than a week later, Bridget announced the results: a total of 175 votes cast, with a really healthy turnout on both sides of the Pond and an absolute majority for yours truly. Now all I had to do was organise my itinerary around the Worldcon, book my flights and ... ah, renew my passport, which had expired in 1993.

From that factoid, it won't surprise anyone to learn that I was by no stretch of the imagination (even a scientifictional imagination) any kind of globetrotter. Indeed, the only previous time I'd boarded a plane was for a brief stay in Paris with Ann back in 1986. We'd attended the 1990 worldcon in Holland, but that was back in the days of Critical Wave, so I'd taken Martin's and my stock of back issues over in the boot of my Ford Escort. This was an entirely different league of travel.

After a couple of hiccoughs with my passport photographs, the first set of which were rejected because my head appeared too large (no sniggering at the back, please), I booked the initial flights to Montreal (via Newark, although that allowed me to depart from an airport seven miles down the road rather than the far more distant Heathrow or Gatwick). The local sf group was kindly organising accommodation for the five nights prior to Anticipation, meaning I could chillax before plunging fully into the traditional worldcon maelstrom (likely to be even more hectic than usual, given my TAFF status), and the convention itself had offered to cover my stay at the designated "party hotel", the Delta. I also added flights from Seattle to San Francisco and on to Las Vegas, since all three of those locations had been pretty much nailed in place the moment I'd decided to stand.

A few sections of the journey remained tantalisingly unglued, however. My initial plan to travel to Vancouver by rail collapsed after I discovered that not only would this mode of transport cost considerably more than all the flights combined, but there was little or no active fanbase interested in extending a welcome. Thankfully, I was offered not only a place to stay in Toronto, but a chauffered drive there straight from my hotel, courtesy of Yvonne Penney.

The final – and in some ways most problematical – chunk of the jigsaw proved to be the gap between Las Vegas and New York (I'd already booked the return flight from Newark, figuring that would keep the Immigration & Naturalization Service off my back, which proved to be very nearly correct). An offer to stay in Denver was first extended, then retracted, once my would-be host discovered enthusiasm for my visit approached Vancouver-like proportions. Enter stage right Mr Steven Silver, publisher of this very organ, who stepped in with a very welcome invitation to spend a few days at his home in Chicago.

And with that, as they say, all was set. "Their" optimism was, of course, severely misplaced.

[This is the opening extract from Steve's TAFF notes, which will eventually be rewritten into a full report and released on CD. Full details will be posted at taff.org.uk, the fund's official website, which currently contains the ballot for the westbound race to the next year's UK Eastercon between Anne Murphy & Brian Gray (standing jointly) and Frank Wu. – Steven H Silver]