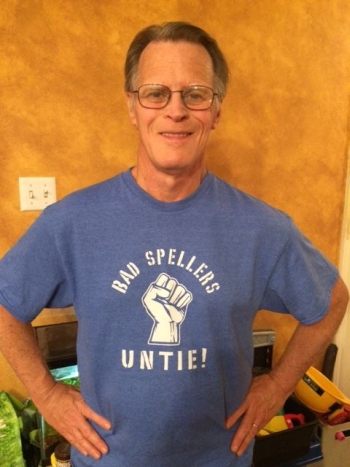 The Administrators of the 2017 TAFF campaign are pleased to announce that John Purcell of College Station, Texas will be the 2017 TAFF Delegate. He will attend WORLDCON 75, the 75th Annual World Science Fiction Convention to be held in Helsinki, Finland, on August 9-13, 2017 (see their website at http://www.worldcon.fi/) and hopes to travel to additional destinations in Europe and the United Kingdom on his trip.

John is a long time fan, originally from Minneapolis where he was very active in fandom in the 1970s, but now resides in Texas where he is a Professor of English and ESL (English Second Language) at Blinn College in Bryan Texas. John currently publishes two fanzines: Askance and Askew, serves the needs of his collection of critters and livestock, and constantly seeks to refine the art of backyard grilling. He is an accomplished folk singer and plans to bring his guitar along in case a performance opportunity or two might turn up at Worldcon 75. He will be accompanied on the trip by his wife Valerie, and they would very much like to hear from fellow fans in the UK and Europe who might like to meet them for a drink or a lunch. Or even host them on part of their journey. Fans so interested should contact John directly at askance73 [at] gmail.com, or Anna Raftery, the UK TAFF Administrator at mokatiki [at] gmail.com.

Following his return home, John will become the next North American administrator of TAFF, and will conduct the 2018 TAFF campaign and election in association with Anna. Fans in the United Kingdom or Europe who may be interested in standing for the 2018 TAFF election – which will send a westbound fan to Worldcon 76 in San Jose, California, should make a point of talking with Anna and John at Worldcon 75 in Helsinki or elsewhere on his trip if at all possible, just to begin the process of becoming involved in one of the best experiences a fan can have. And don't forget to attend the next League of Fan Funds auction at Worldcon 75 where you'll find a world of fannish and sf-ish loot and booty from across time and space. All proceeds to benefit the fan funds associated with Worldcon 75.

TAFF uses a version of the Australian voting system wherein each candidate must have at least 20% of the total vote from both North America and the UK/Europe to advance. Here is the breakdown of the voting results:

Sarah is eliminated in the first round, as her votes did not meet the 20% rule, and second preferences from those ballots redistributed.

John Purcell is the winner by 1 vote. Believe me; we counted those votes several times. We're sure. One single vote. Any fan who may have failed to vote this year in the belief that their vote wouldn't matter – think again. And please vote next year.

Anna and I would like to thank Sarah, Alissa, and John for an excellent TAFF campaign, and we hope that both Sarah and Alissa will consider making a bid for TAFF again. Our most sincere thanks to all who voted in, contributed to, or otherwise supported the 2017 TAFF campaign. ON TO HELSINKI!