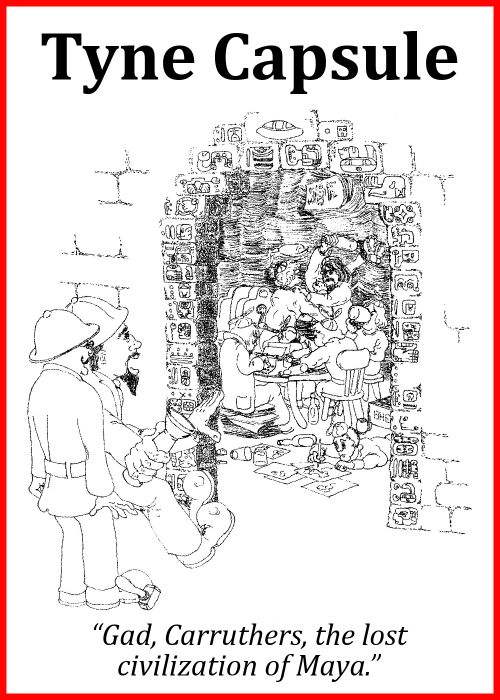 This anthology of fanzine writing and artwork by and about the Gannet fan group of Newcastle and Sunderland – named after their traditional pub the Gannet – was first published at Tynecon III: The Corflu in March 2015. Ebook version by Ansible Editions released for the TAFF site on 30 September 2019. This comprises the full original text (with a few small updates and corrections by Rob Jackson) plus all the artwork; the cover layout has been tweaked for better legibility on small ebook readers. Over 47,000 words.

Why are we commemorating Gannetfandom nearly 45 years after the group first gathered, with a fanthology? It’s a strange claim to fame for a pub with a daft name.

The pub was an unprepossessing subterranean – perhaps “hole” wouldn’t be too strong a word; I’d hesitate to dignify it with the term “dive” – in a very plain Sixties shopping arcade in the centre of Sunderland, so unmemorable that even those of us who met there every Tuesday for over three years can hardly remember the actual building or what it looked like. But what it provided was a gathering place for a bunch of us from a load of different backgrounds drawn together by The Usual round these parts – a love of sf and fantasy.

What sort of fun did we have? Boozy weekends away... boozy duplicating parties... boozy conventions.... I’m sure some of it didn’t involve booze, though. It’s just that those bits weren’t so much fun to read or write about.

How did this motley crew end up producing so many fanzines? And later on, being so creative in programming conventions? The richer the mix of any group, presumably the more they spark off each other. Is it a sort of hybrid vigour that turns the liveliest fan groups into fertile grounds for ideas and gives them that creative spark? Alcoholic disinhibition? Who knows? But I’d better shut up, otherwise this would turn into a Maya editorial, and there are good reasons why I haven’t seen fit to include any of those in this collection.