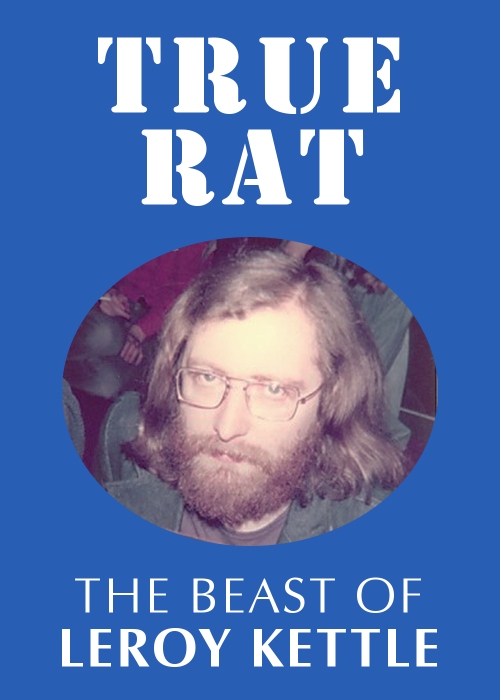 Every issue of True Rat is included, plus much more comic autobiography and articles, speeches and scurrilous gossip columns published elsewhere. Only a very few passages that seemed almost funny in the 1970s are here omitted to protect the guilty (Leroy Kettle).

One included item is the transcript of a live interview with our hero by Simone Walsh – with audience participation – at Skycon, the 1978 UK Eastercon. Rob Hansen strongly recommends the audio version, available as an MP3 download from this linked page on his site.

When Rob Hansen recently suggested reviving an idea he’d had years ago but done nothing with – reprinting my 1970s fanzine True Rat – I was flattered but unsure. It was certainly of its time – nearly 50 years ago that I started it – and obviously we’re all better human beings now. It was very variable – some of it was very good and some, well, less than very good. It had casual sexism, self-centredness, tales of lads behaving badly (sometimes very), self-deprecation, whingeing personal disappointment, variably successful attempts at irony, sarcasm and satire, and general disregard for toes trodden on in a remorseless quest for a joke or gratuitous insult. But it wasn’t exactly unique in fandom in those respects. And the typing, layout and grammar left much to be desired, particularly at first, even by the poorest and most idiosyncratic fannish standards. It was also very limited in scope – written about and for the relatively few people who made up its audience. Well, a bit like a fanzine really.

On the other hand, people seemed to like it a lot at the time. It won, and I won as a writer, various Checkpoint Fan Polls, over several years. Peter Roberts (no less) said it was his favourite fanzine as did Simone Walsh (also no less) about the first issue – “my all-time favourite fanzine”. (My all-time favourite quote.) Chuch Harris (even more no less) said, “True Rat was fantastic, marvellous, truly terrific. I could lift enough one-line quotes from there to fill a ‘-’ bacover twice over.... I feel that it’s time for Kettle to be preserved ... a sort of fly in amber to be fondled and marvelled at by BAFFandom and all Those Who Came After”, though it’s not an image that you’ll want to dwell on. Peter Weston said it made Eileen, and even Vernon Brown, smile. Even Vernon Brown! I achieved the great accolade as a fanwriter of coming just behind No Award on the Hugo ballot. And I think that many of the jokes still work – some are actually quite good, though not, I fear, any of the one-liners in the first issue. And I think I can safely say that the fannish reportage, embellishing the truth as usual, says something about something.