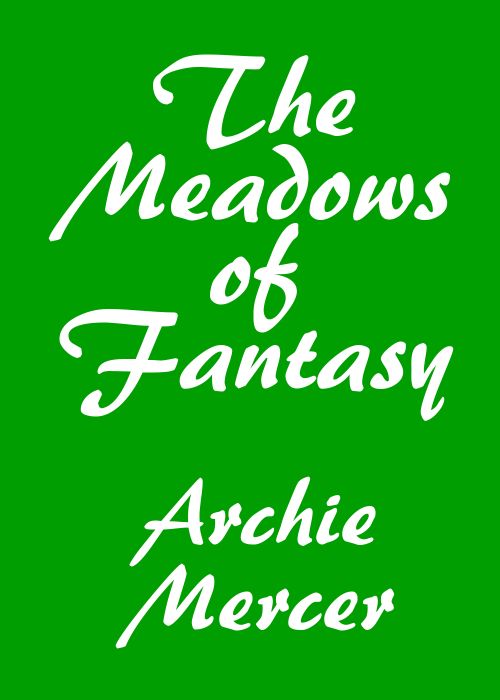 The Meadows of Fantasy

The Meadows of Fantasy was first published in traditional duplicated fanzine format in 1965. Thanks are due to Brian Jordan for scanning the printed version, Erika Maria Lacey and John Teehan for transcribing the scans in 2001-2002, Bill Burns for converting their text to the HTML website version hosted at eFanzines.com since 2005, and Greg Pickersgill for checking likely typos against the original text. The ebook based on all their efforts was added to the TAFF site on 1 July 2019. 59,000 words.

From the Ebook Notes

Archie Mercer’s fannish novel The Meadows of Fantasy was first circulated in two duplicated instalments in the 43rd (March 1965) and 44th (June 1965) mailings of the British amateur press association OMPA, the Offtrails Magazine Publishers Association. This explains the “End of Part One” and reference to OMPA at the close of Chapisode Five. A one-volume edition followed.

Archie Mercer (1925-1998) was a prolific fanzine publisher in the 1950s and 1960s, and the second winner of the UK Doc Weir Award for general contributions to the fan scene. Publications and other achievements are listed in his Fancyclopedia 3 entry.

The Meadows of Fantasy is not a fan allegory like The Enchanted Duplicator but a light humorous novel set against the general background of 1960s British science fiction fandom. One character echoes the author’s fondness for variously excruciating puns. Although Dungeons and Dragons had yet to be launched, role-playing games – in storytelling rather than dice-throwing mode – had considerable popularity in 1960s fandom: the most famous was the US-originated Coventry, mentioned and elaborated on in Chapisode Eight: Fandom Goes to Coventry. Most of the in-group references are concentrated in the similarly cod-mediaeval account of an SF convention in Chapisode Eleven, to which Archie Mercer added his helpful Exegesis to explain who’s who.