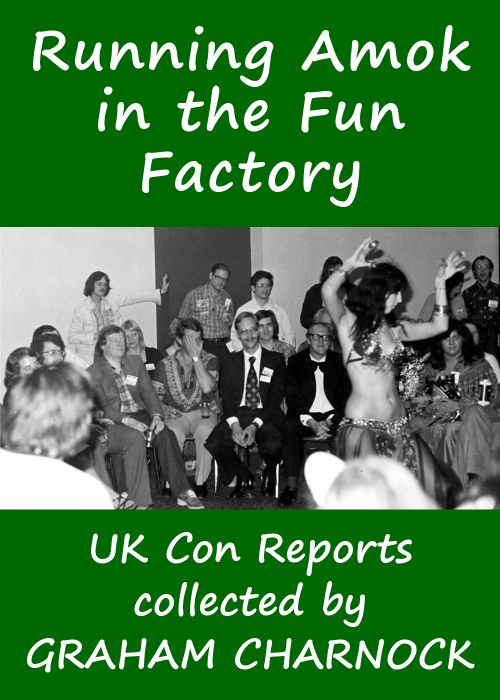 Running Amok in the Fun Factory

Graham Charnock has for years been collecting his favourite UK convention reports by various hands on his website. These selections – plus a few afterthoughts – were brought together as an Ansible Editions ebook for the TAFF site, released 1 November 2017 with a cover image from the glory days of the 1979 Brighton Worldcon: photograph by Kevin Williams. Proofreading by Pat Charnock. 129,000 words.

I was not indiscriminate in my selection; we all know and have published and probably written con-reps which consist simply of a chronological catalogue of events. Those never interested me, even for their historical interest. I was always on the lookout for pieces of writing in which the character of the writer not only shone through but determined the narrative appeal of the article, especially when writing in a humorous vein. We are fortunate in having a number of British fanwriters who qualify eminently on that level. British fanwriters, I think, are especially good at self-deprecating humour, and you will find an abundance of that in these selections, whether at the hands of Peter Nicholls or Roy Kettle. If you have an overdeveloped sense of self-importance it will invariably be knocked back by the typical Convention experience, which is just as it should be.