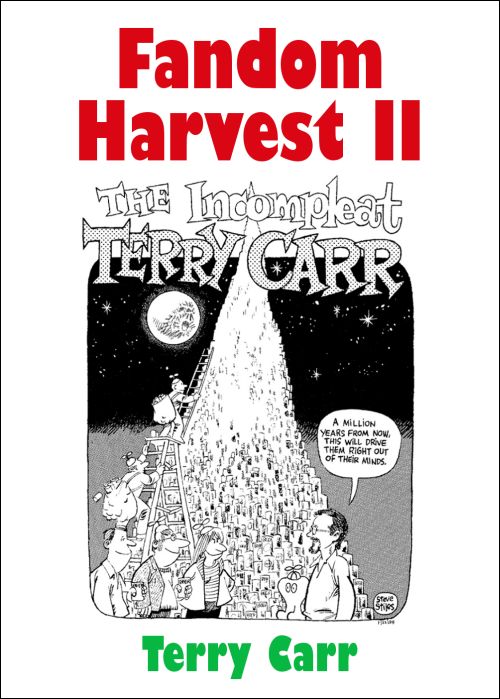 Complementing the 1986 Fandom Harvest and even longer, this further selection of Terry Carr’s fine fanwriting was assembled by David Langford with much help from others and first published as an Ansible Editions ebook for the TAFF site on 1 June 2019; updated with two additional pieces in December 2019. Cover art by Steve Stiles from The Incompleat Terry Carr (1988 edition). Over 120,000 words.

With thanks to Carol Carr for her permission and encouragement to produce this new ebook. (For the many further credits, see within.)

[After listing past collections of Terry Carr’s fanwriting:]

Of the above, Fandom Harvest was the first choice for a TAFF ebook since it’s not only the largest by far of these collections but was published as a printed hardback that was relatively easy to convert to digital text. The next logical step seemed initially to be an ebook of The Incompleat Terry Carr, but unfortunately there’s considerable overlap between this collection and Fandom Harvest. After removing duplications (“Trufan’s Blood”, the “Fandom Harvest” column selections, “The Fastest Ham in the West” and “Confessions of a Literary Midwife”), what remained of The Incompleat Terry Carr was an unsatisfactorily slim volume. This has been augmented with the fannish items reprinted in Between Two Worlds, the four best pieces from The Portable Carl Brandon, and many more notable articles, columns, editorials and stories not previously included in any Terry Carr collection. Ranging from 1955 to 1987, it’s a great read throughout.