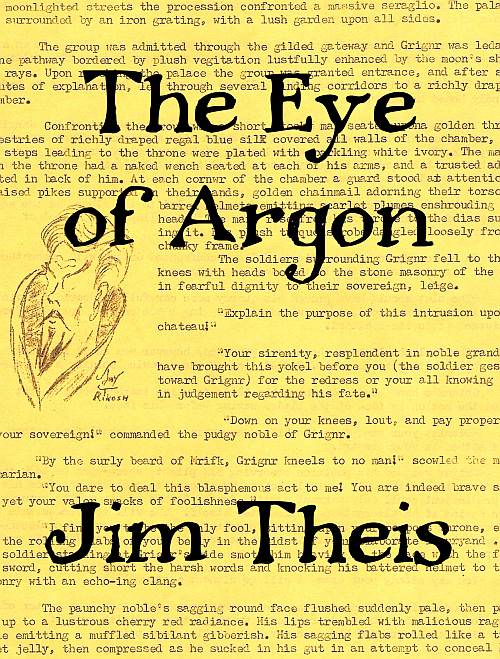 The Eye of Argon

A story somewhat in the mode of Conan the Barbarian, published in the US fanzine OSFAN #10 (1970) with illustrations by Jay T. Rikosh. It has come to be regarded as a classic piece of fan-written fiction, rather in the way that William McGonagall is a classic poet, and has been read aloud or even dramatized at many SF conventions. A digital version transcribed by Don Simpson in May 1983 found new readers on the Internet and was the basis for the present ebook edition, which includes copious historical commentary and the long-lost ending not rediscovered until 2004. First published as an Ansible Editions ebook for the TAFF site in May 2015. Cover art: from a scan of OSFAN #10, page 30. 15,000 words.

The weather beaten trail wound ahead into the dust racked climes of the baren land which dominates large portions of the Norgolian empire. Age worn hoof prints smothered by the sifting sands of time shone dully against the dust splattered crust of earth. The tireless sun cast its parching rays of incandescense from overhead, half way through its daily revolution. Small rodents scampered about, occupying themselves in the daily accomplishments of their dismal lives. Dust sprayed over three heaving mounts in blinding clouds, while they bore the burdonsome cargoes of their struggling overseers.

“Prepare to embrace your creators in the stygian haunts of hell, barbarian”, gasped the first soldier.

“Only after you have kissed the fleeting stead of death, wretch!” returned Grignr.