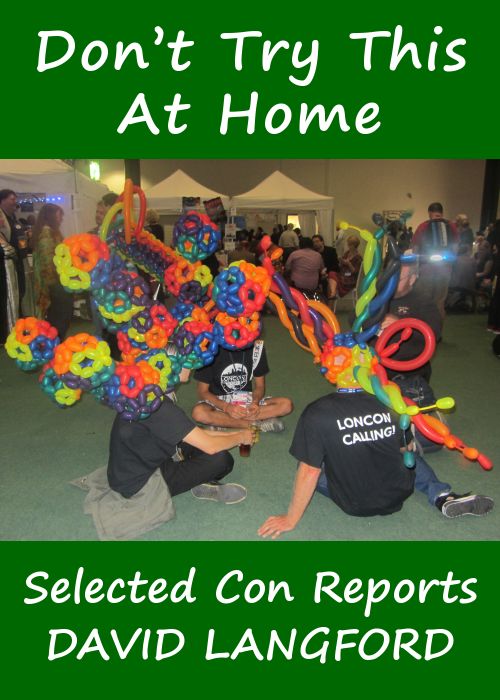 Don’t Try This At Home: Selected Convention Reports was published as an Ansible Editions ebook in July 2015 (available for money with a share of proceeds going to TAFF), and moved to the TAFF free ebooks list on 30 November 2018. Approximately 78,000 words; slightly expanded to about 79,000 words in January 2021.

This ebook collects most of David Langford’s reports on British and occasionally North American SF conventions, from Mancon 5 (the infamous 1976 Eastercon in Manchester) to Loncon 3 (the 2014 World SF Convention in London Docklands). Warning: contains fannish esoterica! Especially in the earliest reports.

There are thirty-two articles in all – chiefly from fanzines but a few professionally published by unwary editors – which between them cover thirty-five conventions plus a few bonus events such as a very strange launch party held underground in the Chislehurst Caves. By way of bookends to the collection the management has also included a brief introduction and an index of coverage by convention name, plus a deeply thrilling list of where everything was originally published.

2021: A trade paperback is also available for those who prefer that kind of thing.

“The ideal Christmas present for the fan who has everything,” writes Eustace Snarge.