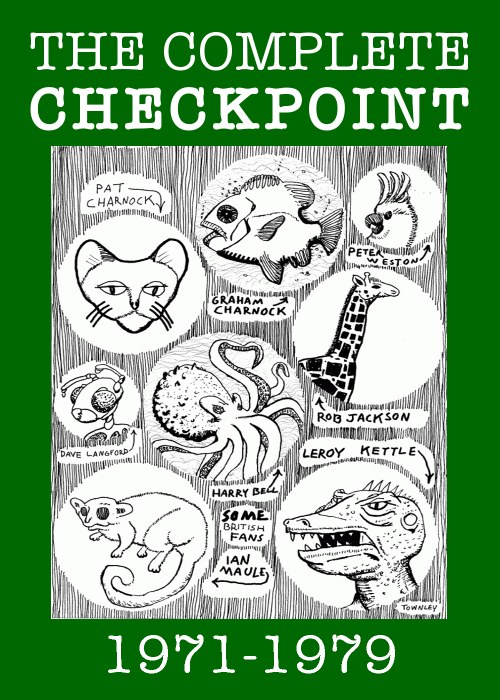 Checkpoint was the major British fan newsletter of the 1970s, following in the wake of Skyrack and eventually passing on the torch to Ansible. With many helpers who are credited in the ebook, David Langford organized the conversion of the complete run of Checkpoint (including its late 1960s incarnation as a venue for fanzine reviews only) to digital form at checkpoint.ansible.uk, a project completed in 2007. This ebook assembles the full text of Checkpoint from that website, with a selection of artwork that could be restored to usable quality. The final issue, Checkpoint #100, includes Peter Roberts’s own subject index of his newszine.

First published as an Ansible Editions ebook for the TAFF site on 1 November 2018. The cover art by Bruce Townley shows his 2006 interpretations of British fans active in the Checkpoint decade. Just over 300,000 words.

From the introduction by David Langford

Besides being an indispensable newszine for 1970s fandom, Checkpoint at its best was great fun to read, with Peter Roberts delighting in strange erudition (not many fans would open their convention report with an adapted stanza from that gloomy eighteenth-century poem “The Grave” by Robert Blair), teasing readers with headlines like SUNKEN P’U RISES AT NIGHT! or the Jello-related FLASH! SCIENTIFIC WORLD QUIVERS!, and announcing his reclamation of the editorship in issue 74 with ...

Alerted by strange signs in the heavens and unnatural noises in the wardrobe, former CP editor Peter Roberts was able to unmask Ian Maule’s miserable scheme to turn Checkpoint into an annual one-page listing of recent Perry Rhodan reprints.

In later issues even the space left at the end of Checkpoint for the mailing details was worth looking at, with the return address introduced by some cryptic phrase or saying. “Kill the fatted beetroot!” it said on one issue, to the possible bafflement of fans who didn’t know Peter was a vegetarian. Other examples were “Klaatu Borada Nikto! But never mind, here’s CHECKPOINT 82.” “Come out, Neville! It’s CHECKPOINT 88.” And of course, “The Gostak distims the Doshes! – but we don’t care, we’ve got CHECKPOINT 96.” When, for reasons which even at the time seemed deeply stupid, I subtitled one of my own 1970s fanzines The Journal of Eschatological Morphology, Checkpoint responded by briefly becoming The Journal of Ecclesiastical Necrology (incorporating Dead Vicars’ Monthly).