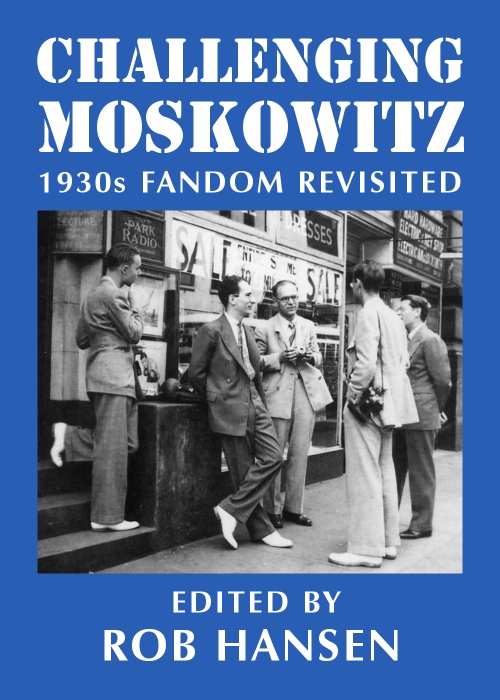 Sam Moskowitz’s The Immortal Storm is regarded by many as the definitive history of US fandom in the 1930s, but several contemporary fans either presented alternative versions of events or took issue with the book’s selectivity (New York-centrism in particular) and partisanship. Rob Hansen has compiled and introduced this collection of relevant fanwriting by Allen Glasser, Charles D. Hornig, Damon Knight, Jack Speer, Harry Warner Jr, Donald A. Wollheim and T. Bruce Yerke.

First published as an Ansible Editions ebook for the TAFF site on 1 November 2019; updated January 2021 with an additional short piece by Julius Schwartz; further updated June 2021 to link to Sam Moskowitz’s response to the Harry Warner article. The cover photograph of (from left to right) Jack Darrow, Julius Schwartz, Conrad Ruppert, Donald A. Wollheim and Julius Unger is from the Ted Carnell collection; actual photographer still unidentified. Approximately 47,500 words.

From the Foreword
by Rob Hansen

If you are interested in the history of, say, World War Two, it’s possible to find multiple books covering all but the most obscure parts of the conflict. Which is how it should be. The more viewpoints that are available, the more rounded an appreciation you’re likely to acquire of the matter at hand. This has not traditionally been the case when it comes to histories of SF fandom. For many years, you went to Harry Warner Jr’s books for the history of fandom in the 1940s and 1950s, and to Sam Moskowitz’s The Immortal Storm for the 1930s. Apart from Damon Knight’s later The Futurians, and bits in autobiographical works by members of this particular group, that was it for the decade. However, there were others who covered the period at length in fanzines at the time and whose writings when taken together constitute another viewpoint: hence this volume. Though Challenging Moskowitz is, I know, a provocative title, my intention is not to undermine or disparage SaM’s work but rather to supply another text that can be read alongside his and provide some contrast.

A later note: This collection includes T. Bruce Yerke’s “Memoirs of a Superfluous Fan” (1943), of which a revised and annotated version was published in 1992. Although we’re not sure that the changes are significant enough to warrant redoing this ebook, here is a link to the 1992 version at Fanac.org.