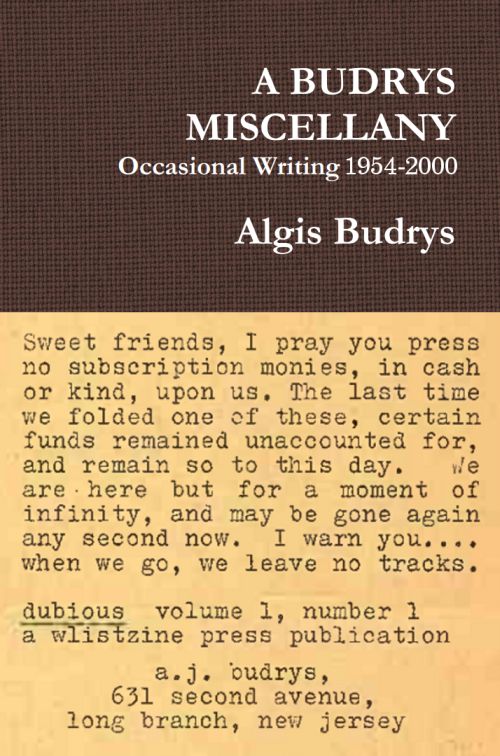 The story behind this ebook: when David Langford compiled the monumental Budrys collection Beyond the Outposts: Essays on SF and Fantasy 1955-1996 (see https://ae.ansible.uk/?t=budrys4), he and his many helpers unearthed a mass of material that didn’t fit that book but for the most part seemed too interesting to waste. The Budrys estate, represented by The Algirdas J. Budrys Trust, has kindly allowed the release of A Budrys Miscellany as a free ebook to promote Beyond the Outposts and the long series of F&SF book review columns collected as Benchmarks Continued (2012), Benchmarks Revisited (2013) and Benchmarks Concluded (2013).

A Budrys Miscellany includes both issues of the author’s entertaining 1960 fanzine dubious; a selection of SF round-up newspaper columns each briefly covering several books; samples of his voluminous writing outside the genre, including motor-magazine and popular-science columns plus many lively reviews of thrillers, spy novels and other “Pop Lit” for the Chicago Sun-Times; and all the editorials – sometimes highly personal – from his own SF magazine Tomorrow Speculative Fiction. Further material has been added since first release, including more reviews that hadn’t previously come to light, Budrys’s contribution to the Who Killed Science Fiction? symposium, the 1964 essay “Notes on Storytelling” whose insights were developed in many later articles and columns on writing, the 1981 memoir “Michaelmas and Me”, and the long autobiographical piece “A Man in Touch with Tomorrow” from 1997.