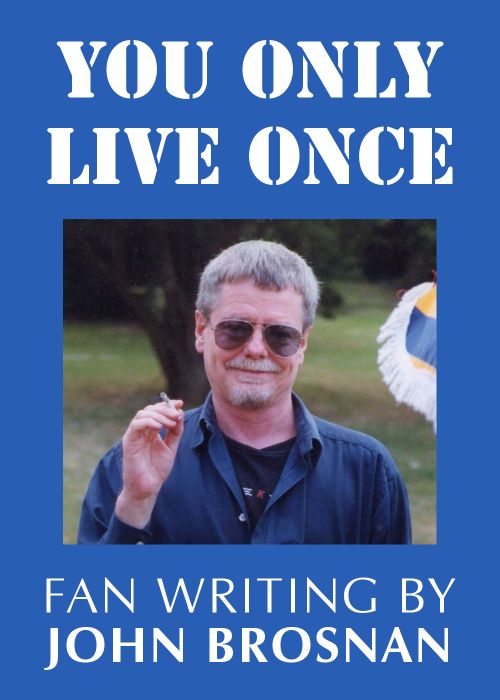 You Only Live Once

A collection of John Brosnan’s best and funniest fanwriting, compiled and edited by Kim Huett as a 2007 PDF hosted at eFanzines.com and now expanded by Kim for this Ansible Editions ebook. Cover photograph by Leroy Kettle. Introduction by David Langford. First published as an Ansible Editions ebook for the TAFF site on 1 February 2018. 90,000 words.

Our man’s legendary Starburst film/tv column is not represented in You Only Live Once, but here’s an extract to give the flavour of John Brosnan channelling F.R. Leavis at his most austerely critical:

from It’s Only a Movie

Actually, I saw an episode of Lost in Space recently, ’though at first I didn’t realize what I was watching. I was round at Harry Adam Knight’s flat (well, let’s be honest – at his hovel) and we were both suffering from the effects of various alcoholic concoctions we’d imbibed at the James Herbert Appreciation Society Dinner the previous evening. Well, I was sitting there with a hair of the dog that had ripped my legs off the night before in my hand when I gave a cry of alarm and told Harry I was having an attack of the DTs.

“Harry,” I said in a shaky voice. “I can see a man running around dressed like a giant red carrot!” But Harry told me to calm down; the TV set was on and what I could see was a character in an episode of Lost in Space.

I peered more closely at the screen (well, I had to crawl over to the TV on my hands and knees before I could get the picture in focus properly) and saw that Harry was right. We watched for a while longer, but when Dr Smith got turned into a stick of celery we realized we were out of our emotional depths, considering our delicate physical conditions, and put on an old Sooty video.

I know it’s all very boring, but I have another novel out. It’s called, with stunning originality, The War of the Sky Lords and is the sequel to The Sky Lords. As I know from past experience that none of you cheapskates will rush out and buy a copy I will ask you instead to order a copy from your local library. You don’t have to read the damn thing, just order it and take it out, say, once every couple of weeks. As I get 0.0000023 pence everytime someone takes one of my books out of a library I will be able to retire in 2087 unless in the unlikely event that death intervenes first.

So go to it, folks! The sooner I’m rich the sooner I can stop writing. Can you think of a better good cause?