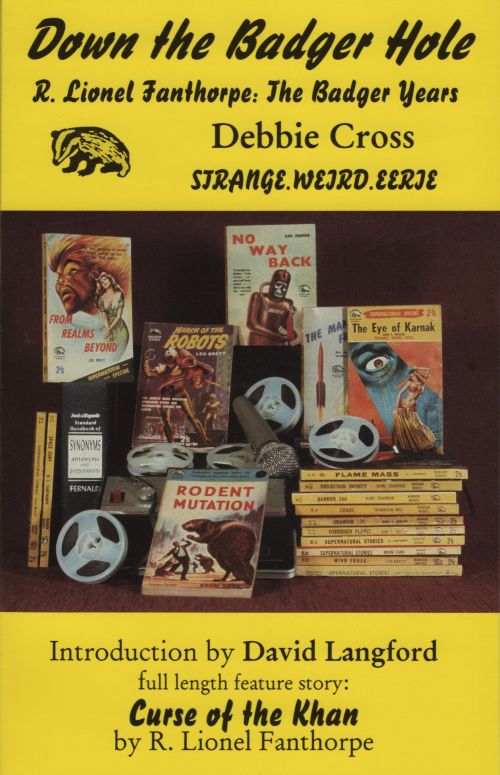 Down the Badger Hole

Down the Badger Hole, a showcase of Lionel Fanthorpe’s greatest moments at the Badger Books fiction factory, was first published in paperback by Wrigley-Cross Books in 1995. Besides many story and novel excerpts the contents include introductions by Lionel and Patricia Fanthorpe, David Langford and Debbie Cross, a detailed bibliography, and the complete tongue-in-cheek story “Curse of the Khan” in which Lionel and six of his pseudonyms battle supernatural horrors. The Bibliographic Supplement (Wrigley-Cross Books, 1999), edited by Debbie Cross and Brian J. Hunt, adds more bibliographic detail and a further selection of quotations.

This new ebook of Down the Badger Hole includes the complete text of the original book and supplement, with small corrections and still more tasty examples of Badger-era dialogue, melodrama, philosophy and padding. The cover is from the 1995 paperback, with photo by Jim Fiscus and design by Debbie Cross. Published by Ansible Editions at the TAFF site on 1 March 2018. Over 50,000 words. In the all too frequent words of the Badger Books blurb writer, this compilation is “STRANGE. WEIRD. EERIE.”

from the Introduction
by Lionel and Patricia Fanthorpe

As the Seventh Cavalry Major inevitably used to say in the John Wayne films: “Never apologize. Never explain – it’s a sign of weakness.” It’s a pity the Ancient Mariner wasn’t in his troop. “O.K., son, so you shot the damned bird – now let’s eat it! Don’t wander around the deck whinging and moralizing – make the most of the situation: pluck it, gut it, slice it and put the best bits under pastry.”

“So you sold a couple of hundred pulp novels and anthologies back in the Fifties and Sixties – and nobody offered you a Nobel Prize or a Hugo. What the hell! Make the most of it! There’s no such thing as bad publicity – although some is better than others. You were, after all, the World’s most prolific SF and Fantasy writer. Talk about it. Cash in on it.” Or as the dying Wyatt Earp was alleged to have told the cub reporter who wanted the real story of the OK Corral: “To hell with the truth, kid. Print the legend!”