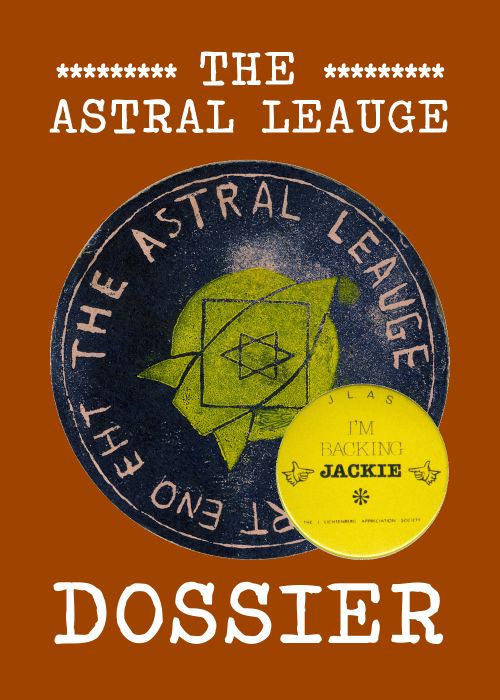 Collecting the arcane wisdom of the Astral Leauge, which began with cryptic flyers in 1976, revealed the secrets of NODEAL PHRENOLOGY, ALTEAN MYSTOLOGY and TRUE FACTS, expanded into strange hymns and painful rituals, spawned the now incredibly rare Astral Leauge Yearbook 1977 (included in full), and took a new turn with the splinter cult known as the Jacqueline Lichtenberg Appreciation Society whose flyers caused much uproar during and after the 1979 Brighton Worldcon.

The 1979-1981 JLAS flyers were previously collected as the TAFF fundraiser Jackie! (1981) – also included in full, plus extras that appeared as late as 1985. Graham Charnock, 33° Astral Master (Lapsed), has kindly contributed a new Astral Intoduction that REVEALS ALL. The Astral Leauge Dossier ebook was first released on the TAFF site on 1 September 2019. 21,500 words. Donot impinge copyright or THE ASTRAL LEAUGE WILL TAKE MEASURES.

From the Astral Intoduction
by Graham Charnock

WARNING! Do not read this if you suffer from acute Febrility and/or Pounce’s Disease or are at all prone, especially to gullibility. We take no responsibility for anyone who seeks to ignore our sageness. In fact we take no responsibility for anything. This is not an authorized Astral Publication but in fact the first step of a Ponzi scheme designed to make a deaf man who lives in Reading very rich. If you bought it expecting any of the money to go to TAFF you are seriously deluded and therefore welcome to the Leauge. If you downloaded it for free without making any contribution you will certain ROT IN HELL.