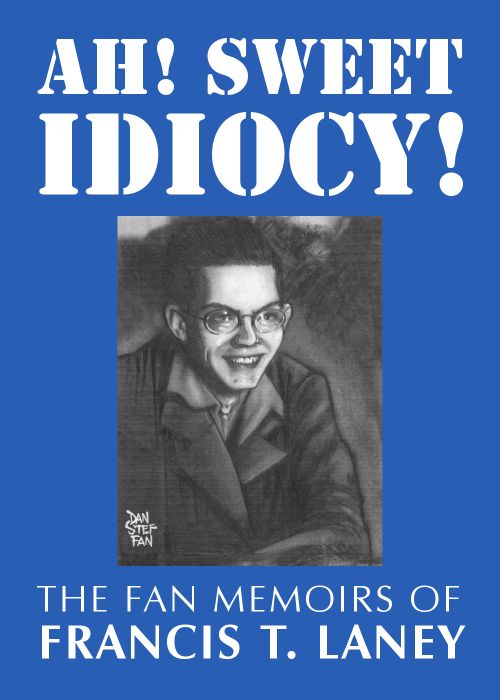 This infamous memoir and polemic about the 1940s Los Angeles fan scene was published in 1948. The first ebook edition was finalized and added to the TAFF site on 1 April 2019. Cover painting of Francis T. Laney by Dan Steffan (previously unpublished). 85,000 words of Laney plus 18,000 of additional material for a total of 103,000 words.

Please be warned that a few passages display a level of homophobia perhaps excessive even by 1948 standards.

Francis Towner Laney’s many brief and often affectionate character sketches of contemporaries may be of more interest now than all the fiery rhetoric about political machinations and (gasp) homosexuality in and around the Los Angeles Science Fantasy Society, a gigantic arena of controversy in which world-shaking elections could be deadlocked with 8 votes to 8. Still-remembered subjects of Laney “vignettes” include Forrest J Ackerman (alternately a close friend and deadly rival), Fritz Leiber, Clark Ashton Smith and A.E. van Vogt, while among his offstage correspondents were Anthony Boucher and August Derleth. Ah! Sweet Idiocy! has always been controversial: Fancyclopedia 3 notes that “Canadian faned Beak Taylor reportedly quit fandom after reading it. Laney himself would not allow it to be reprinted during his lifetime, evidently fearing lawsuits.”

David Langford has added brief notes on abbreviations never or only belatedly explained in the text; with help from Robert Lichtman, a summary of its reissues since Laney died; and from Rob Hansen’s photo archive, contemporary snapshots of Laney and many other featured fans (Rob has since posted a page of additional LASFS photos). Also included are Harry Warner Jr’s 1961 appraisal of Ah! Sweet Idiocy! and Alva Rogers’s 1963 rebuttal of the Laney thesis, “FTL & ASI”.

• Another Laney ebook in the TAFF library is Ah! Sweet Laney! The Writings of a Great Big Man – a selection of his other fanzine pieces chosen by Robert Lichtman and first published in 2007.