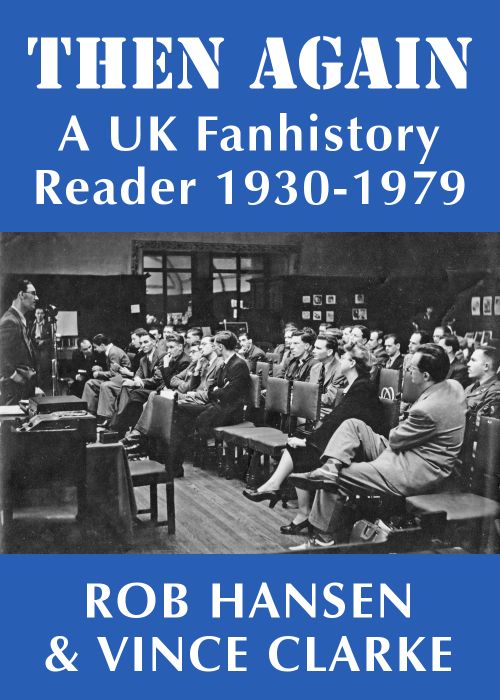 This companion to Rob Hansen’s monumental THEN: Science Fiction Fandom in the UK: 1930-1980 brings together the writings of many players on the stage of British and Irish fandom from 1930 to the end of 1979, telling in their own words the stories of SF groups – including the BSFA – fanzines, famous fannish addresses, bizarre fan activities and much more. There are 59 articles, several compiled from more then one source, plus an Introduction, Appendix and Afterword.

Cover photo: Festivention 1951, with Ted Carnell speaking and Forrest J Ackerman at front right. Published by Ansible Editions for the TAFF site on 1 August 2019. Over 120,000 words. Updated, replacing one brief article with a much more detailed one, in January 2021: now 123,000 words.

As its name suggests, THEN Again is intended as a companion volume to THEN, one in which the story of the first half-century of SF fandom in the UK is told by others. As to what is and isn’t included, that’s largely a matter both of what was available and what I could find. I was careful to ensure England, Scotland, and Northern Ireland were all represented, yet Wales isn’t. This is ironic given that Dave Langford, Greg Pickersgill, and I are all Welsh, but the sad fact is that I could find no discrete articles of any substance about such as, say, the Cymrades of the 1950s or the Newport group of the late 1970s and 1980s. This despite me being a founder member of the latter. [...]

In the piece that opens this volume and sets the tone for it, Walt Willis envisioned the creation of a history of UK fandom by accretion. He saw a series of articles being written incorporating reprints of old material that, when collected together would form that fanhistory. More or less. THEN Again probably isn’t quite what he had in mind but it does suggest a way forward in assembling a history of fandom for the period after that covered by THEN. If no-one feels up to writing and producing something as densely researched, THEN Again provides what I hope is an alternate model.